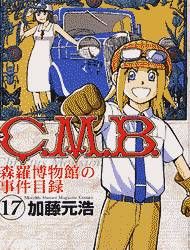 We all know that a lot of the booty of the golden age of explorations made it into museums. The British Museum in the C.M.B. story, which had custody of the recondite scientific curiosities and artifacts collected by explorer/adventurers and stored in a Wunderkammer, decided to study the dusty arcana in the 19th century. Three investigators dubbed the "Magi" were appointed to do the research, each given a ring embossed with the letters C.M.B.Fast-forward to present-day Japan where Sakaki Shinra is the curator of a museum of oddities. He now has possession of the C.M.B. rings, indicating that he has been granted the status of guardian of knowledge like the Magi that preceded him.Similar to another Katou Motohiro-sensei hero—Q.E.D.'s Touma Sou—Shinra has a mysterious past, is multi-lingual (English, Latin, and five others), possesses college-level knowledge of chemistry, physics, biology, and history, and is deficient in social skills. How the blond 14-year-old (who also happens to be Touma's cousin) came to hold the rings, as well as why Shinra is the curator of a bizarre museum in Tokyo (the contents of which he loves to show off) are backstory mysteries I look forward to being solved.