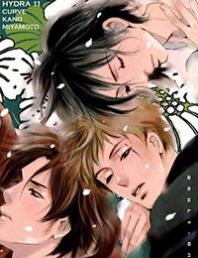 1-4) When Ryuu transfers to Hitomi's school, he leaves an immediate impression on him. Curious about rumours of a full-scale tattoo on Ryuu's back, Hitomi starts getting closer to him. Before long, the friendship and fascination Hitomi feels for Ryuu start developing into more, but before he has a chance to come to terms with his feelings, Hikaru appears on the scene.... and he has his eyes set on Hitomi.5-6) Now that Hikaru has become close friends with Hitomi and Ryuu, the group dynamics have changed. When Hikaru expresses his growing interest in Hitomi, will Ryuu admit his feelings or let Hitomi slip away...?7-8) Ryuu seems to have found comfort in other places as Hitomi and Hikaru Taira get further involved. Sexual frustrations finally find an outlet, though misdirected.9-11) In a startling series of events that lead up to Hydra's transfixing climax, hearts break, enemies resurface, and ties of friendship bind the trio in a complex web of struggle, sacrifice, and redemption.
Subscribe Chapter list