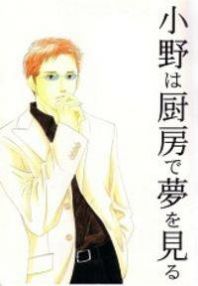 Kanari Hitodenashi - Pairing: Kuze Shouhei x Ono Yuusuke This is a story about right after Ono gets rejected by Tachibana and ends up going to that gay bar. Right away he finds someone and ends up sleeping with him. (from Anna) Hatsukoi - Pairing: Katagiri x Ono Ono's Kitchen Dream - Pairing: Chikage x Ono Ono is talking to Kanda about a sex scenario involving him and Chikage after he admires Chikage looking sexy. (from Anna) Neko To Ojisan - Pairing: Shouhei Kuze x Kazutoshi Saiki Shouhei Kuze, the first man Ono slept with, uses Ono's charms to bag himself a homophobe for the night. Kouzuka No Ehon - Pairing: Various Some yaoi fangirls decide to come into the Antique Bakery and begin to speculate the type of pairings that could exist amongst the staff. Very funny, you got to just love Ono and Tachibana in this doujinshi! (from neutral) Eien Wa Arimasu Ka? - Pairing: Ono x Tachibana Ono ends up pretty beat after sleeping with someone. After that occurs, he goes to Tachibana's place crying and Tachibana does the first aid thing on him. While Tachibana is giving Ono a shower (he's washing his hair for him), Ono ends up crying and seducing Tachibana. Which ends up with Ono completely molesting Tachibana of course... (from Anna) Akuma No Youna Otoko - Pairing: Chikage x Ono Chikage volunteers to go back to Ono's apartment with him during work hours in case the abusive former boyfriend is still there. Aoi Tori - Pairing: Chikage x Ono Ono moves to a new apartment, and Chikage and Ono try to figure out what their relationship will be now. Tameiki wo Tsukinagara - Pairing: Chikage x Ono Ono cheats on Chikage, gets sick, and talks to Tachibana. Tanabata No Yoru - Pairing: Chikage x Ono Ono's flashback on school days when he first fell in love with Tachibana. [Chapter 10 is missing]- Will Be Reported Soon.
Subscribe Chapter list