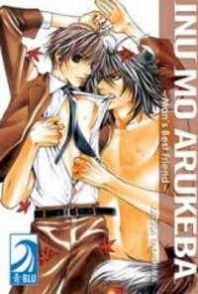 Collection of stories 1) Inu mo Arukeba Fallin' Love When Ukyo rescues a stray dog, he soon learns that he may have made a rare find. His new dog, who he’s named Kuro, can talk! And if that’s not crazy enough, soon Kuro is able to magically transform into a human! With his dog now taking the form of a hot man and licking him in various places, what is Ukyo to do?! Who says you can’t teach an old dog new tricks? 2) Inu mo Arukeba Burning Love 3) Inu mo Arukeba Getting Love 4) Mata Natsu ga Kita (Summer Has Come Again) Two children, Kasumi and Ken, are closest of friends, but due to family circumstances are separated from each other. Ten years later, Kasumi is back in town to reunite with Ken, but both find that their relationship to each other has gradually become increasingly complicated... 5) Pinpoint Lovers The story of love between Kazumi and Kentarou, from 'Mata Natsu ga Kita,' continues in this new installment. This time, together they face the trials of a long distance relationship, complicated further by the interference of a third person. 6) Kingyou Hime (Gold Fish Princess) At a festival a boy ends up saving a goldfish from being thrown away. After putting it in a bottle with some water he goes to sleep. When he awakes there is a beautiful girl-no boy in front of him. The beautiful boy claims to be the fish he saved and asks what he could possible do to repay him for saving his life.
Subscribe Chapter list