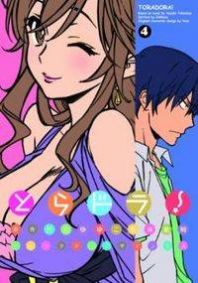 Ryuji Takasu is a gentle boy who does all the cooking and cleaning in his house, unfortunately he is cursed with his father's scary looking face. Labeled as a "delinquent," Ryuji has few friends. One of the people who doesn't run away at first sight is Minorin, an eccentric girl, whom Ryuji falls in love with. Perhaps by fate, the "delinquent" bumps into the also notorious "Palmtop Tiger". At first glance she is a cute little doll, but he finds out the hard way SHE's the one who should be feared and called a delinquent! Her name Taiga Aisaka. After an odd turn of events, it is discovered that not only is this fierce Tiger best friends with Minorin, but she also loves Ryuji's best friend! Will this odd duo be able to pair up as allies in love?